The Air Medical Today Podcast - Episode 5 has been published.  In this episode I interview Mr. Jonathan Godfrey, a flight nurse, air medical crash survivor, and chair of the Vision Zero Initiative for the Association of Air Medical Services and provide News & Information including the Haitian Air Ambulance Response, and a "First Response" Interview of the Survival Flight Crew who transported two Patients from Haiti.
Jonathan Godfrey lives in Chesapeake Beach, Maryland, next to the Chesapeake Bay but is originally from San Antonio, Texas.  He took a nursing travel assignment in the Washington, DC area in 1996 and never expected to stay but found that he liked four seasons and their were great job opportunities to boot. He still describes himself as a south Texas man at heart, however.

Jonathan is the sole survivor of a January 10th, 2005 Life Evac 2 crash into the Potomac River in Washington, DC after dropping off a patient at the Washington Hospital Center.  Pilot, Joseph Schaeffer and Flight Paramedic, Nicole Kielar were killed in the crash.  Underwater, Johnathan made it to the surface, swam to the tail of the aircraft which was floating in the water and then held on in the freezing cold until he was rescued by Alexandria Fire & Rescue via boat and then flown to the Washington Hospital Center by the Maryland State Police Trooper 2 medevac helicopter.  Over the next few days and weeks he learned of all his injuries which included a compound fracture of his right humerus, a sternum fracture, 2 right rib fractures, pulmonary contusion, substernal hematoma, 7 thoracic fractures, right shoulder dislocation with a Hill Sach’s lesion, sprained ankles, and severely bruised hips.


From that terrible ordeal, Jonathan has spoken around the country on air medical safety as the Chair of the Association of Air Medical Services Vision Zero Committee.  He is also involved in the new Survivor's Network for Air & Surface Medical Transport with fellow air medical survivors, Megan Hamilton, Teresa Pearson, Krista Haugen.


When not speaking and lecturing he works as a flight nurse at one of the busiest pediatric /neonatal transport systems in the country.

Jonathan has three children, 2 girls and a boy ranging in age from 7 to 13.  His spends most of his free time with his children.

He is a diploma RN from Baptist Memorial Health System in San Antonio and has dreams of returning to school at Embry Riddle Aeronautical University and completing his masters in aviation safety systems.


I caught up with Jonathan in Virginia Beach, Virginia at the Virginia State Nurses Association Annual Meeting where he will be delivering a speech on the his crash experience going from provider to patient.

In this episode I started a new section of the podcast called "First Response".  My first interview was with the medical crew of the University of Michigan Survival Flight program who had completed a two patient transport from Haiti.  I caught up with Flight Nurse, Wilson Bowers and Flight Physician & Chief Emergency Medicine Resident, Jeff Potof from their base in Ann Arbor, Michigan. 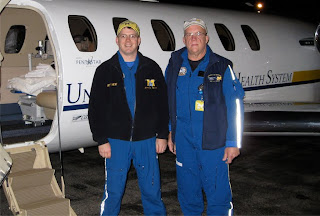