Episode 9 of the Birkie Web Today Podcast has been published.  In this episode I interview Louis Muench, Vice President of the Cumberland Area Ski Touring Association, about his experience skiing in the inaugural BirkieTour.  I also check in with fellow Birkie Buddies, Tim Burke and Mike Tarnow, who participated in the Noquemanon Ski Marathon in Marquette, Michigan this past Saturday in the On The Trail section of the podcast.

Louis Muench lives in Cumberland, Wisconsin where he works at Louie's Finer Meats owned by his family.  He is the Vice President of the Cumberland Area Ski Touring Association, which maintains the Timberland Hills Ski Trails.  Louis is responsible for updating trail conditions on the club’s website and their Facebook page. 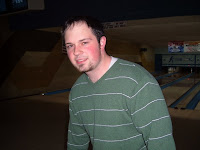 In 2001 Louis completed the Kortelopet, but was first signed up for the race in 2000 which was the year it was canceled. In 2002 he completed his first Birkie and has participated each year ever since.  Louis also participates in a number of other ski events each year including the Pre-Birkie and Book Across the Bay races.

As part of our On the Trail section of the podcast we will either be  literally out on the Birkie Trail or on the scene for interviews.  Today I check in with my fellow Birkie Buddies, Tim Burke and Mike Tarnow, who participated in the Noquemanon Ski Marathon this past Saturday, January 30th in Marquette, Michigan.

Tim (left) and Mike (right) have skied the Noque, as it is called, three times since the race began several years ago.  This year Tim completed the 25K Freestyle event and Mike the 25K Classic race where he placed 4th overall for his age group.
Posted by Edward R. Eroe at 06:25