Episode 15 of the Air Medical Today Podcast has been published.  In this episode I interview Hayden Newton, the Chairman of the Association of Air Ambulances in the United Kingdom.  I also provide an update on the Iceland Volcano and News and Information from the air medical community and industry.

Hayden Newton is currently the Chief Executive of the East of England Ambulance Service NHS Trust where he was appointed in February 2008.   He was the former operational manager at Peterborough ambulance station before taking up a directorship with the Scottish Ambulance Service in 1988. 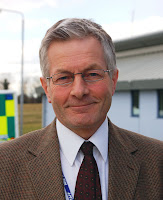 Hayden has a post graduate diploma from the University of Glasgow in Management studies and is a paramedic.  He lives with his wife and son in Cambridge.
Posted by Edward R. Eroe at 18:23